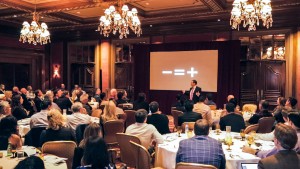 You might expect that 10 speakers at a gathering of more than 100 San Diego-area executives would talk about making money, planning strategy and maximizing profits.
But it was people, not profits that took center stage at the annual “Sage Talks” event hosted by the peer advisory organization Sage Executive Group at the Fairmont Grand Del Mar on Dec. 13.
Overcoming personal adversity and bouncing back from professional setbacks were the broad themes presented by many of the presenters, who modeled their 18-minute talks on the popular Ted Talks format.
Jeremy Poincenot, who lost his sight to a rare genetic disorder at age 19 while attending San Diego State University, said he had to learn the “importance of interdependence” when he could no longer pursue the independent lifestyle of a college student. That interaction in the form of coaching from his dad on every shot, helped him win an international blind golf championship.
Aaron Chang, who was a senior photographer for “Surfing” magazine for more than 25 years, received the painful message from a litany of New York agents that his photography was “unmarketable.” He went on to fame and success and now owns galleries in San Diego and Solano Beach that bear his name.
And Stacey McKibbin hit rock bottom on a street corner in Pacific Beach, abandoned by a boyfriend and betrayed by the alcoholics in her family. She pulled herself up to run her own company and speak to hundreds of business leaders about “the key” to achieving leadership.
Videos of the talks will be posted soon on Sage Executive Group’s YouTube Channel.
Other speakers included:
Peter Scott, founder of Fearless Life Academy: “Fear: The Hidden Cause of Stress”
Dan Negroni, founder of launchbox: “Depolarizing Millennial Madness”
Susie Japs, managing director of Wejungo: “Why You Suck at Interviewing”
Sarah Hardwick, president of Zenzi Communications: “Three Ways to Waste Your Marketing Budget”
Gary London, president of The London Group Realty Advisors: “It’s the Top of the Market – Beware”
Patrick Combs, president, Great Thinking Co. “The Greatest Business Story Ever Told.”
Mark Moses, founding partner of CEO Coaching International: “Make Big Happen”
Sage Executive Group is a fast-growing membership network and advisory group for business leaders. What sets SAGE apart in working with the region’s top executives is a philosophy that emphasizes values, guiding business leaders to achieve greater success in business management and performance while also carrying out responsibilities to family, community and personal health.